Picked up my frame liners and the new rear crossmembers today. 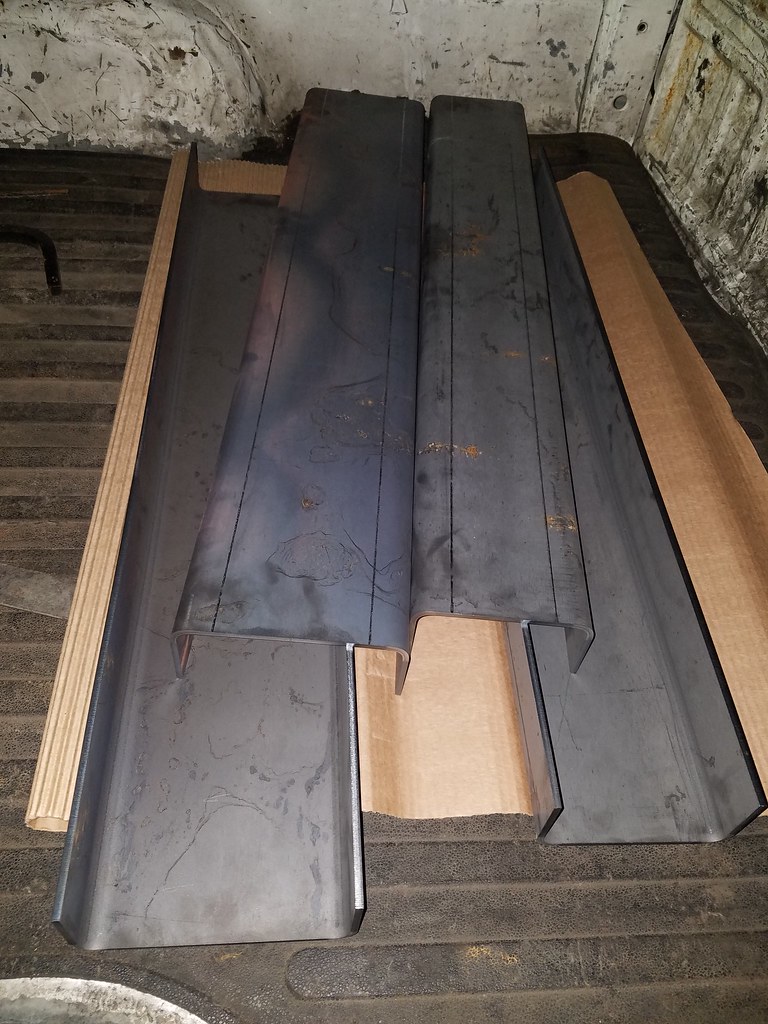 With luck I'll have the rear crossmembers and tank installed this weekend. The frame liners I'll do later on. I'm going to wait until things are a little farther along and move the truck over to the ramp hoist so I can work on cleaning up the welds and install the liners comfortably.

Not a lot of progress today, many, many, many things went wrong with everything I touched. I did get a few things started but nothing finished. 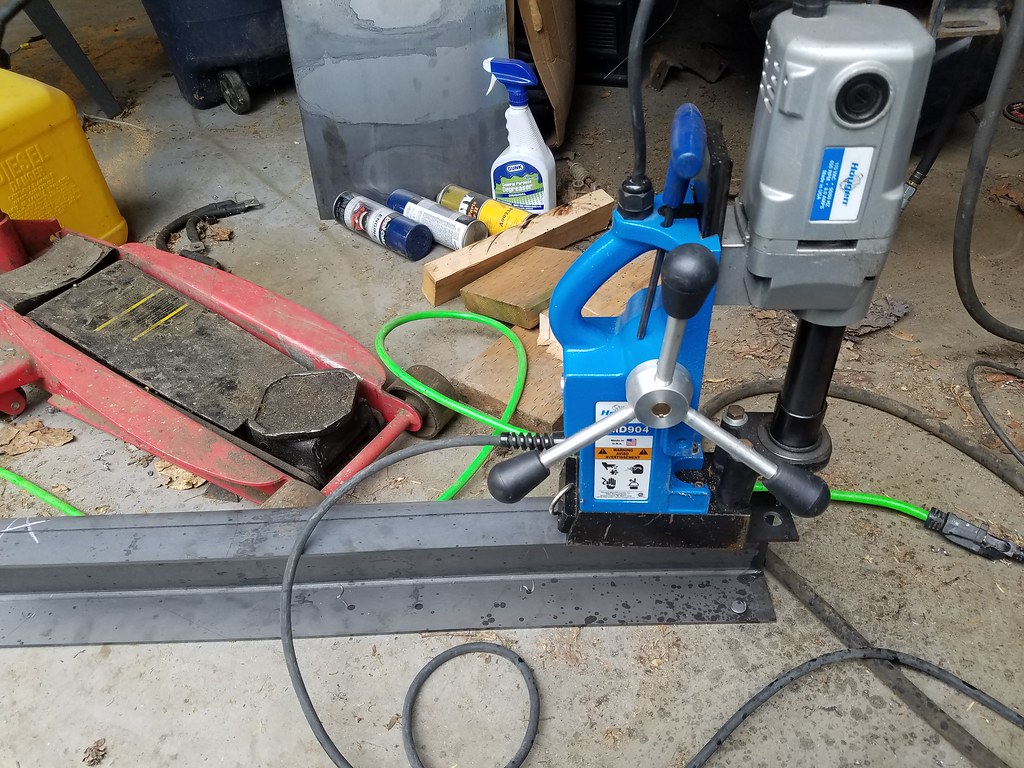 20200516_125151 by Patrick Oilnut, on Flickr
Laid out some holes and drilled them in the new rear crossmembers. The rear most one will be held in on the bottom by the trailer hitch bolts. The top I'll either need to drill and bolt or I may just weld one corner on each side. 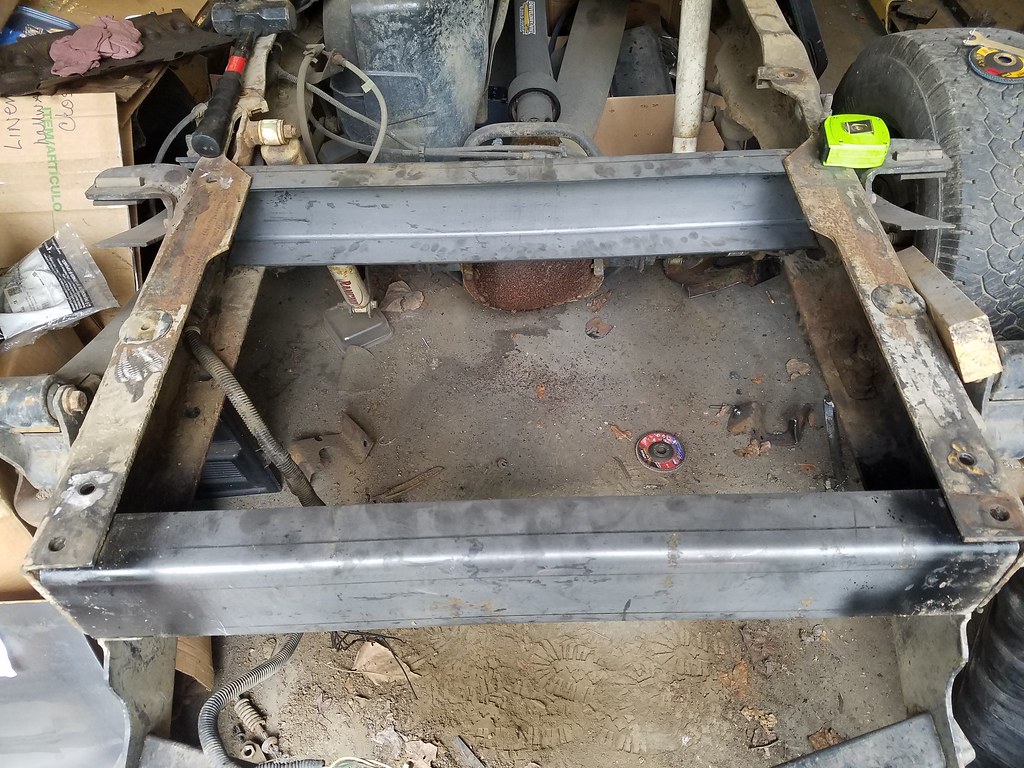 20200516_134801 by Patrick Oilnut, on Flickr
When I sent the CAD file to the shop to have the material cut and formed I used the same "sheet" which had all the tolerances listed in the data section and I should have specified different tolerances for each because these rear crossmember sections I measured differently. All that is a long way of saying that they were TIGHT, but fit fine. 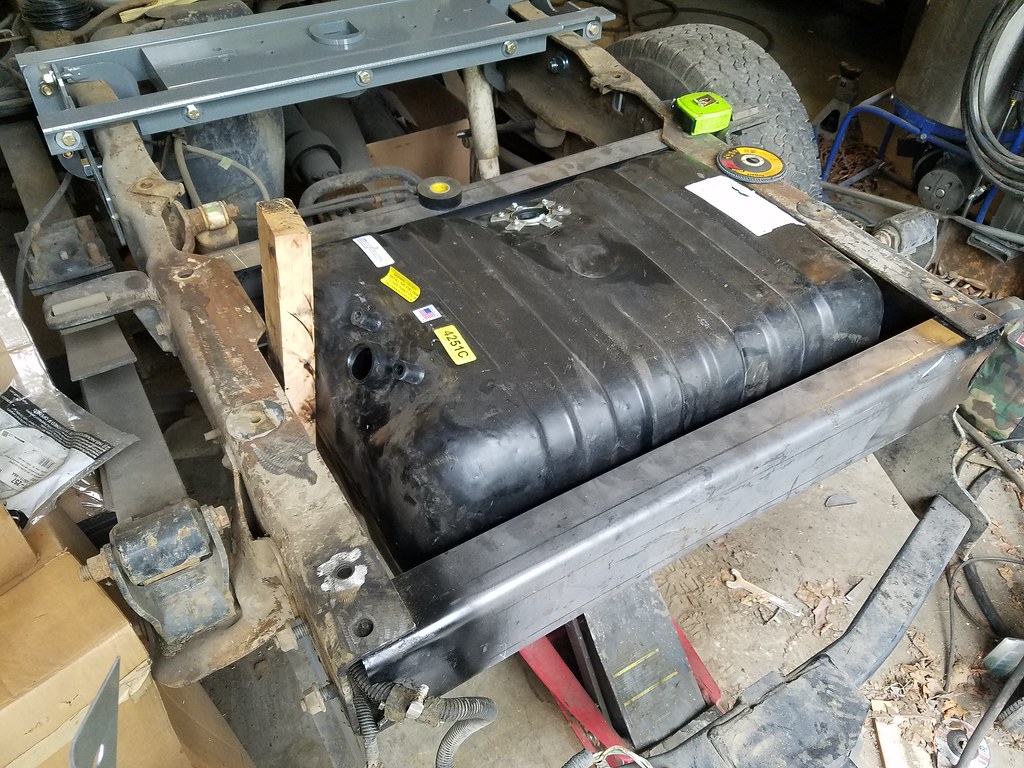 20200516_153625 by Patrick Oilnut, on Flickr
After getting both crossmember sections in I decided to set the tank in and make sure I like how everything fit. And I think it will work out ok, my only concern is having enough room and enough drop to get the filler necks on both tanks hooked up. My plan for now is to just use the normal straps to mount the tank and I'll probably build a skidplate type mount for it at some point in the future. For now I just need the tank installed and hooked up. Had a heckva time finding a sending unit, everyone is out of stock but I did find a place that says they have one and it's on order. 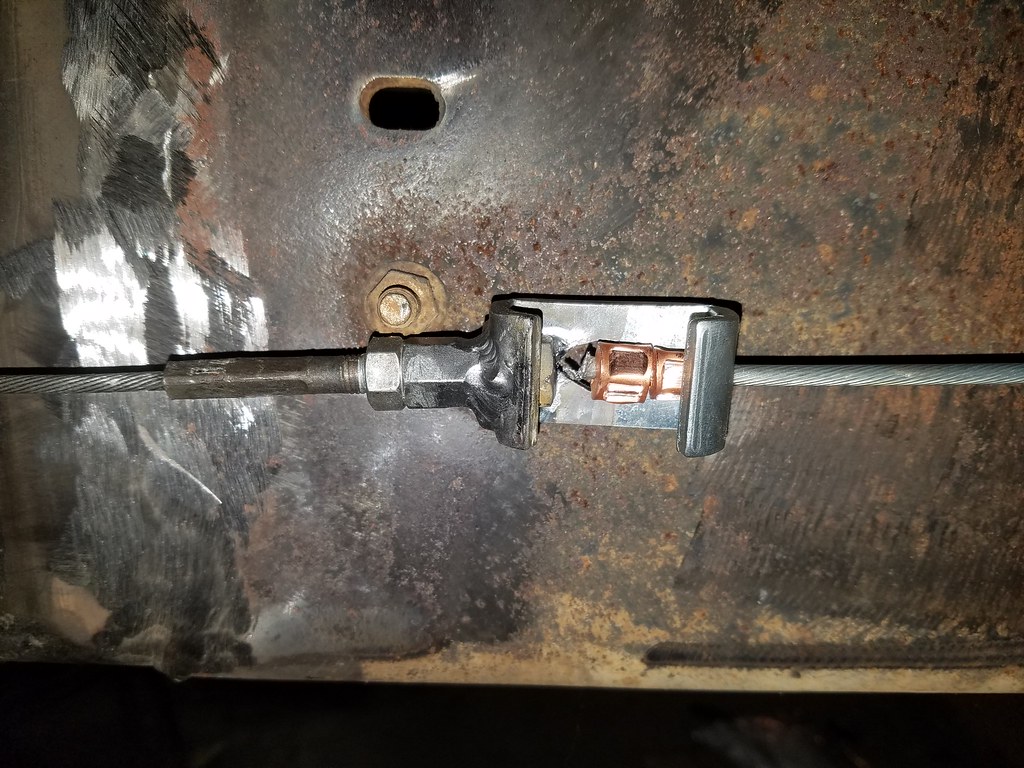 20200516_162342 by Patrick Oilnut, on Flickr
Custom built parking brake cable adjuster to go from whats left of the 77 front cable to the rear section of the SuperDuty cable. I know, the welds are terrible, but it was an awkward position to weld in and I still had the foot pedal hooked up so I was running the pedal with my elbow and trying to lay the rod in with the other hand and not shake too much. Anyway, it works and soon it'll be covered in dirt anyway! If any of this gives me trouble I may consider using something like an EStopp or something.

I also threw a goosneck hitch on while I was back there. You can see it in the pics sorta. Not sure it'll fit with the dent side bed but I'll find out when I test fit the bed. Hopefully it'll work, but if not I'll build my own at a later date.

Wow! really nice project you've got going on there, and great work so far...

I am Mouguluc. Why? Because I can't figure out how to change it.

Wow! really nice project you've got going on there, and great work so far...

Thanks. Hopefully it turns out ok! 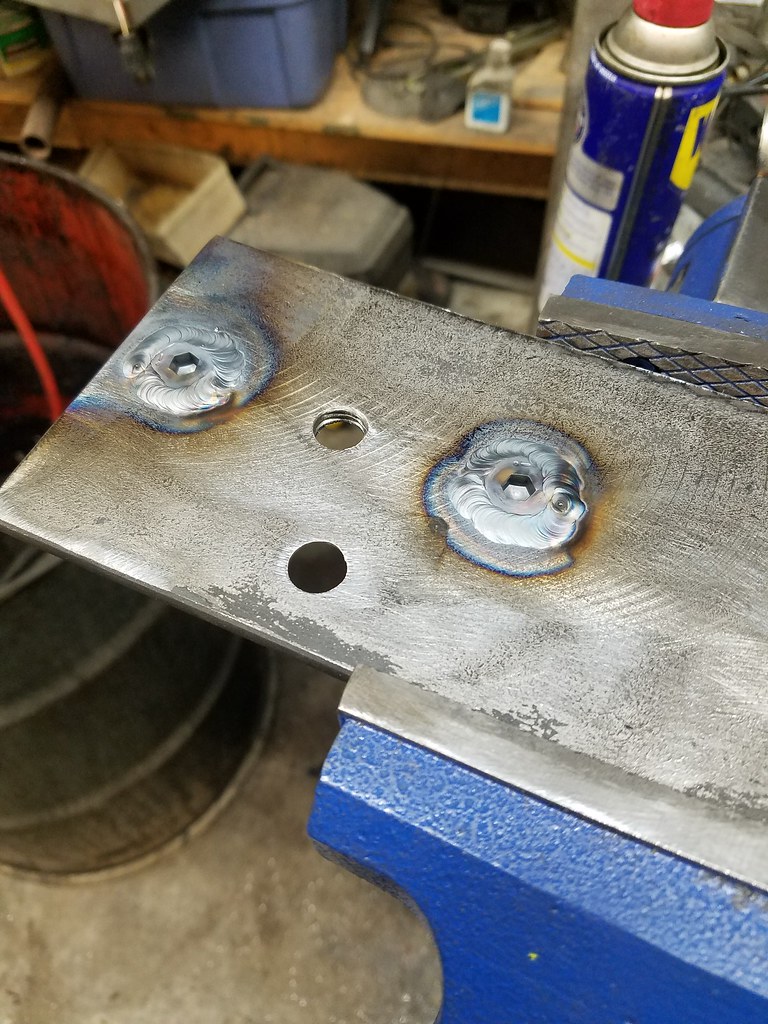 20200522_194332 by Patrick Oilnut, on Flickr
Mounting plate to fit the NV4500 and accept the SuperDuty transfer case shifter assembly. The mounting patterns overlaped so I used flat head bolts to mount the plate to the transmission and then welded 2 more in from the back to hold the shifter guide plate on the front. Not the exactly weld-porn, but they're not bad for being shaky. 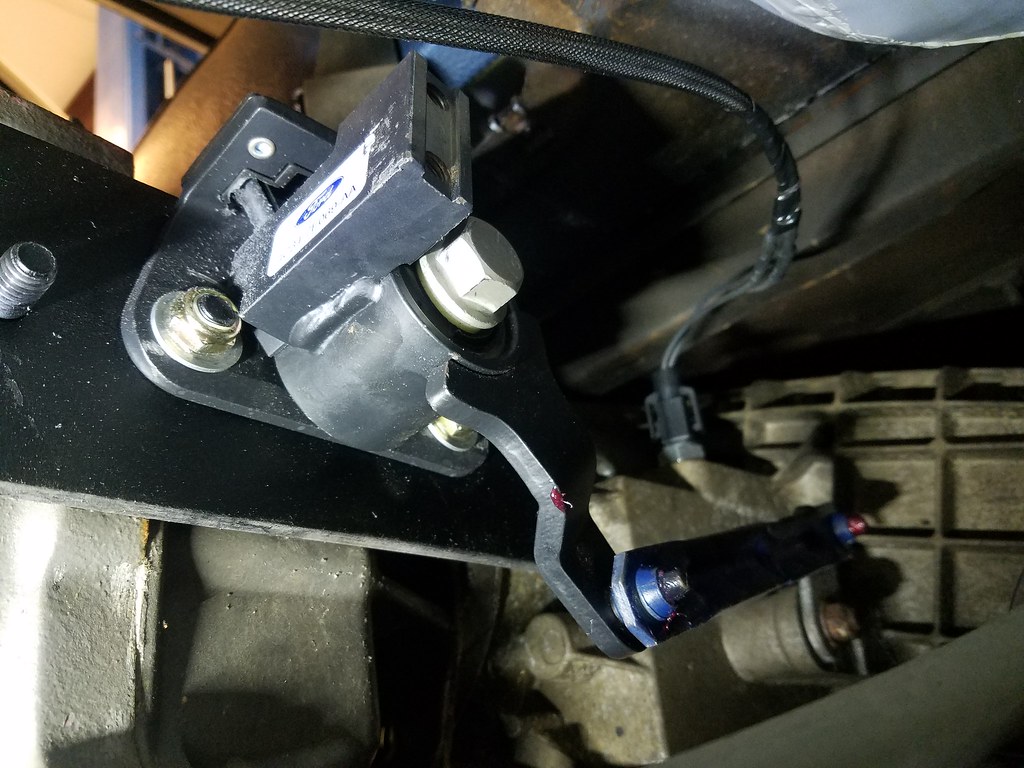 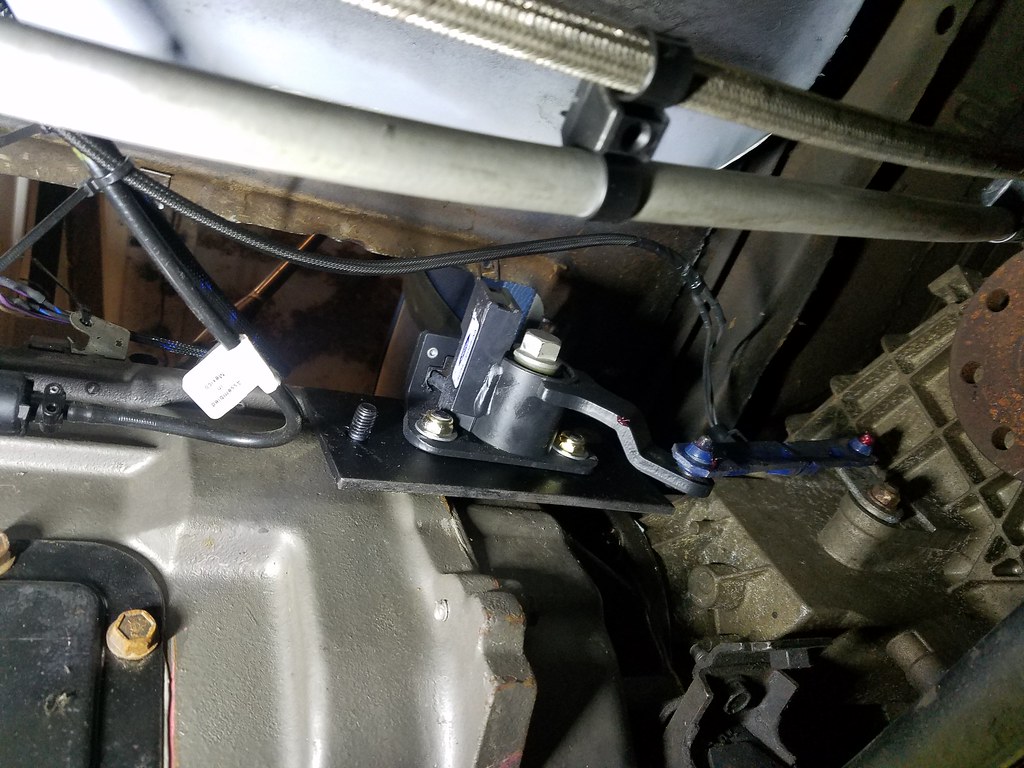 20200522_214805 by Patrick Oilnut, on Flickr
I made a ruff template for where the shifter handle needs to be bent. Tomorrows project before I head over to the shop is to start bending that up and see if I can make something that will fit nicely. Gong to try and get it somewhat close to the factory location so I can use the OEM shift boot for the transfer case.

Almost got the transfercase shifter bent enough times to work and be sorta where I'd like it to end up. Hopefully I can still get the stock shift boot to work.

Also manage to get the new rear crossmembers fully installed and the transfer fuel pump mounted. Couldn't get the rear tank installed because my plan was to use some weld nuts on the inside flange of the crossmember for easy servicing later on. Trouble is somehow I managed to order fine thread versions and I don't have any fine thread flange bolts. Sooo, back to the store Tuesday I go.

I did however manage to get the cruise control wired up, the only thing I need to do is hook up the switches but I'm hiding those in the center console when I put the buckets in.

Also got the hood back on with new hood hinges. There will be a LOT of alignment needed, but I knew that already. I've been holding off on doing that until I get the bed more or less where I want it in case I need to shim the back up or something. Getting closer.... 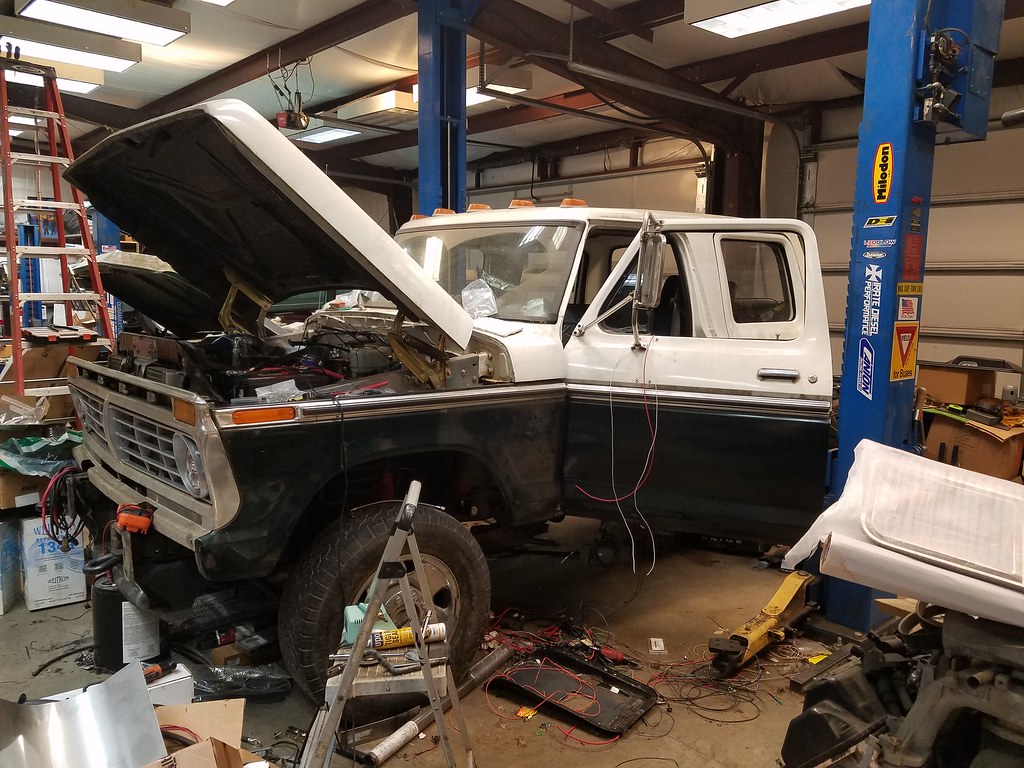 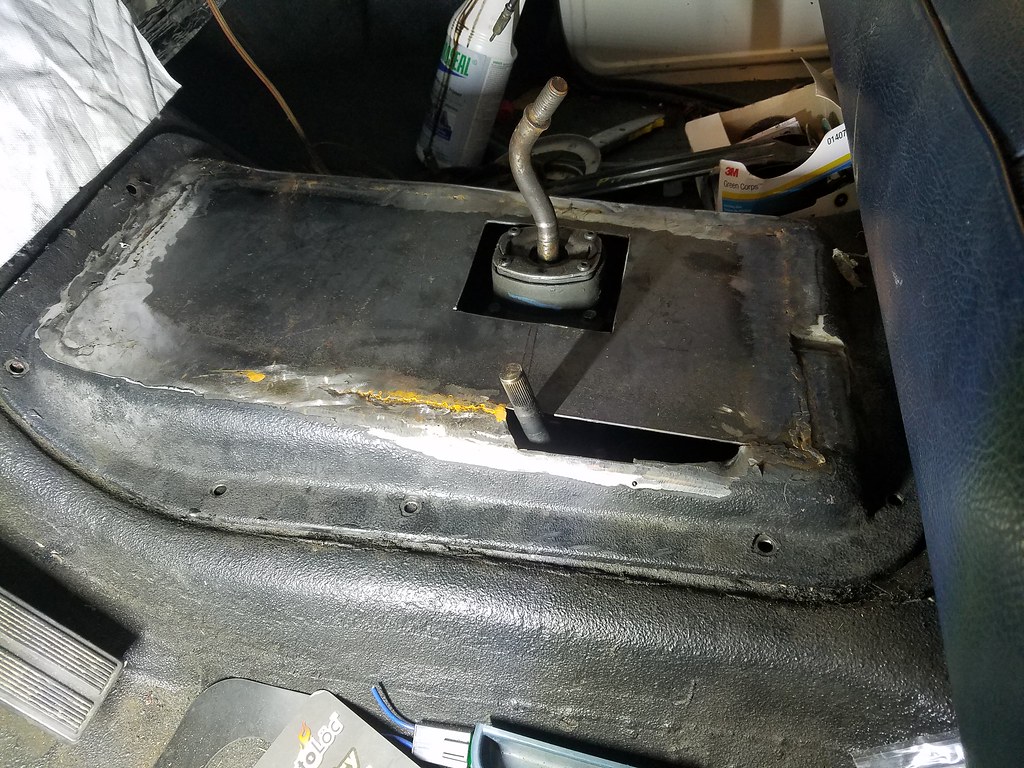 Disco! Transfercase shifter finally fits and I can comfortably get every shift location now. Obviously I'll need to extend it a little, but that is easier than getting all the bends in the right spot! A lot of torch and vise time on this one.

I already widened the opening and everything is fitting nice. Next up is complete the metal finishing on the panel and put some paint on it. I'm going to put a couple layers of insulation on it before install as well as a generous amount of sealant around the floor pan. Really trying to keep this thing as quiet and cool as possible. I've got to try and find some screws, the tunnel cover was already loose when I bought the truck. Going off memory with no example in the bolt store might be interesting.....

Way too many times I've headed off to the store to grab a bolt for a vehicle or some other around the house project like a faucet repair thinking that I'll be able to easily pick out the right pieces I need to finish my project. Then you see the vast selection of say faucet valve bodies and end up needing the original pieces for reference because there's no handy book to positively ID what you need.

Then you see the vast selection of say faucet valve bodies and end up needing the original pieces for reference because there's no handy book to positively ID what you need.

House plumbing is the WORST. No matter how many spare pieces you have it's never the piece you need and you go back to the store and get 5 more and end up with a whole shelf of spare parts that I don't think were ever used in any plumbing system EVER, they're just on the shelf to make you buy them because they're almost what you need.